Musician, Sarah Burrill, 57, is photographed in her home in Eastham, MA. She was diagnosed with stage 4 inflammatory breast cancer at the age of 40. "I was in shock when I found out and did everything under the sun. I had two rounds of high dose chemotherapy and a mastectomy; I did herbs and glyconutrients; I even had myself energetically erased!" she exclaims. Sarah got an enormous amount of support from her community which hosted six fundraisers for her. "I’d go out just for hugs and to have connection with people even though I looked quite scary," she recalls. Sarah eventually had her other breast removed because she didn’t want to have reconstructive surgery and was tired of medical procedures. "I did mourn both of them but it’s okay at this point," she says. The tattoos she now has on her chest represent her connection to her sister, whose ashes are buried under the cherry tree in her yard and her mother, whose ashes are buried under the dogwood. "Music really helped sustain me when I was going through treatment," Sarah explains. "I brought my guitar to the hospital and when I was too sick, I watched the Beatles anthology videos". Sarah wrote the song "Rise Above"--from which this project's title comes--for the Cape Cod Women's Music Festival a few years ago. The lyrics became a local anthem for women going through breast cancer. "So put your hands in our hands, we’ll walk together strong and we'll kick some ass, we’ll rise above and we’ll carry-on," she sings. 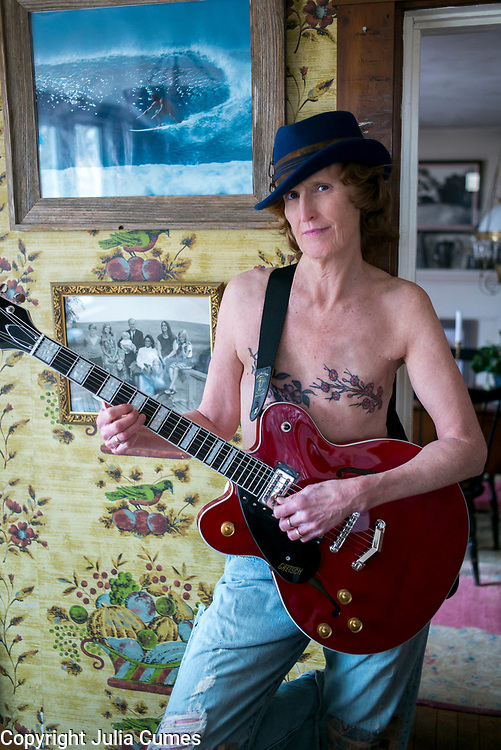